The reptilian lizards of Malaysia vary from the small lizards like the geckos (Family Gekkonidae) to the fairly large monitor lizards (Family Varanidae) that look like juvenile crocodiles, especially when you meet them near the river-banks.

You'll surely be fascinated by the unique variety, character and beauty of the different types of Malaysian lizards

In between them we find the smaller-sized malaysian lizard families like the agama lizards (Family Agamidae), flying or gliding lizards (Genus Draco), butterfly and spiny tailed lizards (Family Uromasticidae) and skinks (Family Scincidae).

The small lizards usually make the womenfolk scream or squeal and jump when surprised by them, but so do some "menfolks" (though they won't admit it).

But, let's not go into this, okay, because it's not the lizard's fault.

Well, Malaysia is home to a rich variety of these God-created creatures, from those that can swim agilely in water to those that can fly, glide and maneuver among the tall tropical trees.

If you love these reptiles, be assured that you'll be fascinated by the unique variety, character and beauty of the different types of lizards found in Malaysia.

Malaysian monitor lizards are typically large with slender and forked tongue which is sensitive and serves as location guides to hunt for preys and food.

The Bengal or Clouded Monitor Lizard (Varanus bengalensis) can sometimes be seen moving slowly on land and even on tree trunks as they search for beetles, other insects and nestling birds and eggs. It is not uncommon to see them lying on a branch up a tree that is 20-30 feet high.

The Water Monitor Lizards (Varanus salvator) are usually found near watered areas, and are also great swimmers, often seen swimming in the streams, rivers and lakes, in search of prey.

Monitor lizards use the hollows of trees as home or nest although they usually make holes at river-banks or on high-level grounds.

Although they are shy of humans, they sometimes look and forage for food near homes especially in the rural areas, where chickens and ducks are reared in the backyard, their eggs being a favorite food for these lizards.

They may look slow and bulky, but monitor lizards are actually agile and swift when they need to, especially when going after their preys, or when running away from people. 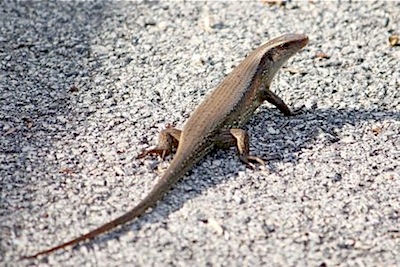 Skinks are probably the most diverse species in the lizards family.

Malaysian skinks are mostly terrestrial, living among the leaf litters, loose soils and rotten tree trunks in the forests and undergrowths.

We can easily recognise skinks by their medium sized bodies, with generally smooth and supple bodies and small legs and with an usually long tail.

When we go into the forests of Malaysia, don't forget to look for skinks in their habitats mentioned above, like rotten tree trunks or near water pools, bushes and undergrowths of grass.

They like to hide, but sometimes they just freeze when surprised by humans, and run away quickly in spurts when sensing danger.

At night we usually can hear the calls of geckos when they make the famiiar clicking sounds at home.

But in the forests of Malaysia there are many more species. They mostly have color patterns that normally match their surroundings, camouflaging them against predators and their preys.

Geckos eat the small flying insects, like ants, crickets and roaches, and they are oviparous, laying two eggs at a time.

And in the rural areas, common house geckos love to catch insects that are attracted to the bright lights of houses.

But in the morning, unfortunately, there are usually the recognisable white and black dungs of the geckos on the floor exactly below the ceiling lights!

Another wonder of the geckos is that they can shed their tail when they are under attack.

And the tail seems to wriggle by itself, attracting predators to the tail while the lizard makes its escape -- a very neat and clever diversion indeed.

How do geckos walk on ceilings upside down?

Well, God created them with highly specialized digital pads, or scansors, under their fingers and toes.

This provides grip like a vacuum pump allowing them to move even on smooth surfaces. And their sharp claws ensure that they can grip tightly on rough surfaces.

Agama lizards or agamids generally look like ancient lizards with spiny crests or horns on their head, and neck and some even up to the tail.

They are mostly active during the day as they feed on insects and other small-sized animals.

Unlike geckos, their tails are not easily broken, and they are typically terrestrial or arboreal.

They also change skin colors when appropriate, blending with their surrounding.

Garden Fence Lizards are perhaps most common in Malaysia as they can be found in gardens, parks and open forests.

There are many species of Malaysian gliding or flying lizards with their own unique pattern of wings (patagium).

These flying reptiles are of course mostly found on trees, being arboreal. They can be identified by their spindly appearance, and the wide patagium or additional thin skin ( actually a rib cage) along each side of their body.

The males have large and brightly colored throat pouch or fans, while some females have either small dewlaps, or none at all.

These lizards use their patagium to fly or sail from a higher position of a tree to a lower position or to a nearby lower tree.

That's why we usually find them climbing up trees, with their wings inconspicuously folded against their bodies, to prepare for their glide.

Why do they fly?

They fly to escape from predators like snakes and birds, as well as to catch insects to eat, and of course to find and chase their mates!

The Common Butterfly Lizards of Malaysia can be found in arid and sandy places, like near the sea coasts and beaches.

They live in burrows which they dig in the sandy area, and these burrows serve as refuge when predators or humans are around.

It is said that butterfly lizards are so named from the striking colors of their sides or flanks, which look like butterflies when observed from above.

These butterfly lizards will run away swiftly into their burrows whenever humans approach, so it is difficult to get near them.

Where Can We Find These Lizards of Malaysia?

Jungle trails in the forest reserves and national parks in both east and west Malaysia will ensure some very productive outings, especially during the wet weathers when these reptiles come out to search for food.

Forest geckos and skinks are usually active at night, while monitor lizards are active during the day.

Different species can be found at different locations, for example, Tioman Island has some unique species of skinks not found in Peninsular Malaysia.

And in the wild and virgin jungles of Sarawak and Sabah, being part of Borneo Island, we can expect to find myriads of God-created lizard species that are both unique and fascinating.

If you are a wildlife and nature-lover, you'll probably jump and scream when you see a Malaysian lizard; not because you're surprised by its presence, but because of the beauty and wonder of these lizards of Malaysia.

Copyright 2009-2014 All rights reserved All photos are copyrights (Contact us for permission to copy or reproduce images) malaysia-wildlife-and-nature.com


Copyright 2009-2014 All rights reserved All photos are copyrights (Contact us for permission to copy or reproduce images) malaysia-wildlife-and-nature.com